Every 18 Minutes an Aneurysm Ruptures – Are you at Risk? 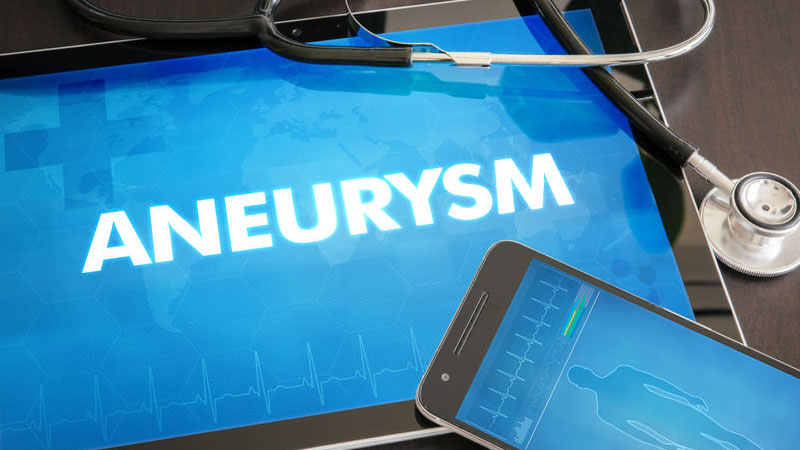 A stealth-like silent bubble could be present in your brain, your abdomen or other blood vessels and you don’t even know it. That bubble is an aneurysm and it has the potential to wreak a great deal of damage. An aneurysm is defined as a weak spot in the wall of a blood vessel. According to the Brain Aneurysm Foundation, there is a brain aneurysm rupturing every 18 minutes with a sobering 40 percent mortality rate.

Neurosurgeon Dr. Francis Kralick of Shore Physicians Group likened an aneurysm to a bubble that forms a bulge on the outside wall of a tire, stretching and weakening that wall. “Higher than normal pressure on the walls of that tire can cause that bubble to burst, and an aneurysm acts much the same,” said Kralick.

Where an aneurysm may form
An aneurysm can form anywhere along the blood vessels in the body, but statistically tend to form at the fork in the blood vessel where they branch off and may be weaker, , according to the American Heart Association (AHA). While aneurysms tend to most commonly be found at the base of the brain, they may also be found in the chest, known as a thoracic aortic aneurysm, which is an abnormal bulging or ballooning of the portion of the aorta that passes through the chest. They can also form behind the knee in the popliteal vessel as well, according to the National Institute of Health.

Dr. Kralick explained that small berry aneurysms may be present in an individual’s blood vessel but never pose a problem because they are very small and minus symptoms, so they will go undetected. The problem unfolds when an aneurysm grows larger and is still without symptoms until it begins to leak or burst.

Symptoms of an aneurysm
The AHA indicates that a brain aneurysm that becomes enlarged presses on nerves in your brain and may cause signs and symptoms. These can include droopy eyelid, double vision or other changes in vision, pain above or behind the eye, a dilated pupil coupled with numbness or weakness on one side of the face or body.

Symptoms of an abdominal aneurysm include tenderness or a pain in the chest.

Thoracic aortic aneurysms often grow slowly and usually without symptoms, making them difficult to detect. Some will experience back pain, hoarseness, a cough and shortness of breath. Some aneurysms will never rupture. Many start small and stay small, although many expand over time. How quickly an aortic aneurysm may grow is difficult to predict.

For a person with a peripheral aneurysm that has formed behind the knee, the patient may notice significant discomfort with walking along with swelling of the extremity.

If the brain aneurysm ruptures, the symptoms include a sudden onset of a severe headache, nausea and vomiting along with a stiff neck, loss of consciousness and signs of a stroke. Dr. Kralick said any of these symptoms require immediate medical attention.

Treatment options for an aneurysm
Dr. Kralick explained that treatment depends on the size and location of the aneurysm and whether it has ruptured. The former method to treat an aneurysm was surgical clipping, which, according to Dr. Kralick, had a longer recovery time. Because it involves general anesthesia and opening the skull, it is used dependent upon the needs and overall health of the patient. Doctors may use a coil method that keeps the aneurysm from rupturing. Or, they may opt for the more common and less invasive endovascular method of treatment.

The endovascular repair method calls for the physician to thread a thin catheter that guides a stent graft through small incisions in the groin. The graft is inserted into the aneurysm and seals it from within.

Imaging is an important diagnostic tool
A CT scan will normally be used to see if the aneurysm has been bleeding, according to Dr. Kralick. Also used is an MRI to get 3-D slice pictures of the area. Cerebrospinal fluid will be drawn to see if there are any red blood cells present in the fluid that surrounds the spine. Dr. Kralick said if there is blood in spinal fluid that will tell the neuroradiologist that the aneurysm may be leaking or has possibly ruptured.

Risk factors for aneurysms
Researchers are finding that like so many other health conditions, heredity plays a role in who may be at risk for an aneurysm. Other risk factors include smoking, drug use, high blood pressure or hypertension, polycystic kidney disease, and congenital abnormalities that have been present since birth in the artery wall. Women have an increased incidence of aneurysms and they are more common over the age of 40. Ruptures of aneurysms are twice as high in the African American population compared to whites.

To learn more or to make an appointment with Neurosurgeon Dr. Francis Kralick of Shore Physicians Group, located at 649 Shore Road in Somers Point, call 609-365-6239.